Clairways smart lung monitoring started as a PhD research project, and it grew into a technology that could help change clinical trials.

Amid the rolling hills and blue skies of Hanover, New Hampshire, Clairways is developing lung monitoring technology to serve pharmaceutical clinical trials. The company is a resident of Dartmouth’s startup support center, the Magnuson Center for Entrepreneurship. With grant funding from the National Science Foundation, Clairways is commercializing patented technology developed over six years of PhD research. Co-founders Justice Amoh, Jeff Bemowski and Kofi Odame recently shared their company story and business plan during the Dartmouth Entrepreneurs Forum pitch competition, where they won both first place and people’s choice.

Justice Amoh and Jeff Bemowski met back in August 2016 when they were each just hoping to find a suitable roommate. Justice had been in Hanover for seven years at that point, completing his bachelor’s degree and returning for a PhD program, while Jeff was moving to Dartmouth to pursue his MBA at the Tuck School of Business. The duo had an instant connection.

“Justice told me he was pursuing a PhD in Innovation,” recalls Jeff, 32. “I had never heard of such a thing, but I could tell Justice was doing exciting work.”

As the roommates got settled, Jeff learned more about Justice’s technology: a Band-Aid sized patch that could non-invasively monitor lung function. Justice, 29, grew up in Ghana as an asthmatic child, so he knew how quickly an asthma attack could escalate.

“The big problem I was working to solve was that there was no way of unobtrusively tracking changes in someone’s respiratory signs over time,” Justice says. “These changes are very important for those suffering from asthma or other respiratory diseases. If you can catch changes and intervene early, you can avoid traumatic and expensive emergency department visits and hospitalizations.”

As a PhD Innovation fellow, Justice was developing a real-world product rather than focusing just on lab research.

“In the PhD Innovation program, we are constantly challenged to actually think about commercializing whatever technology we build,” he explains.

Intent on bringing his technology to the world, Justice asked Jeff for help developing a path to commercialization. Jeff recruited a team of fellow Tuck MBAs to explore the problem for their First Year Project, the culmination of the initial year at Tuck. Justice saw how passionate Jeff was about the work, and by the end of the project Justice and his advisor, Kofi Odame, decided to invite Jeff to form a company with them. In 2018, the trio officially launched Clairways.

This year, Clairways won the pitch competition at the 2019 Dartmouth Entrepreneurs Forum, hosted by the Magnuson Center for Entrepreneurship. Justice, Jeff and Kofi will use the prize money from the forum to fine-tune their prototype and begin seeking clearance from the Food and Drug Administration, something all medical devices need. 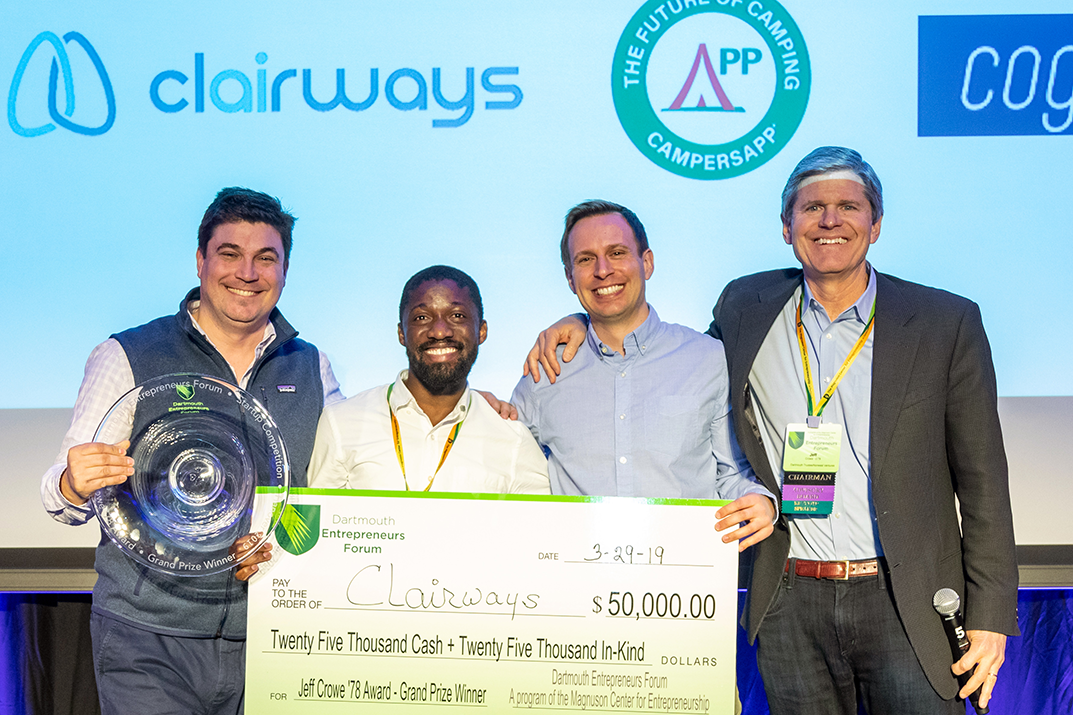 “The real goal in the next year is to move from our lab functional prototype to a customer-ready device we can send home with patients,” Justice says. Within 18 months they aim to have an FDA-cleared device ready to sell to customers.

The company has come a long way since its early days. The device’s primary function has remained the same: Clairways is hoping to help millions of people breathe easier. However, extensive market research has shaped the company’s go-to-market strategy

Through over 150 customer interviews, Clairways has clearly defined the unmet needs the company will address for its initial customers and how its technology will serve these needs. For now, Clairways is focused on helping drug manufacturers monitor lung function during clinical trials for new respiratory therapeutics. In the long-term, the founders plan to expand into use cases that will help prevent emergency department visits and hospitalizations.

From concept to completion, Dartmouth College and the Magnuson Center for Entrepreneurship have been integral to Clairways’ success. Jeff and Justice were able to tailor their academic coursework to pursue their entrepreneurial interests, and to rely on the center for information and resources. One early grant from Magnuson Center allowed them to attend a medical devices conference, where they were able to make connections within the industry and learn more about their customers.

“Nothing is more important to us than understanding our customer,” Jeff says. “Attending the conference was incredibly valuable, and without the support of the Magnuson Center grant, we wouldn’t have been able to do so.”

Undergraduate students at the DALI Lab helped design the company’s website. Overall, the company has benefitted from Dartmouth’s interconnected, liberal arts approach to learning and the Magnuson Center’s support of entrepreneurship.

“We have been a true testament of the Magnuson Center community and this whole approach,” Justice says. “Everyone has played a role in lifting us up to the next stage, and the Magnuson Center was perfect for us when we were ready to go from being a research project to an actual company.”

“We’ve truly benefited from being a part of Dartmouth’s startup ecosystem,” he says. “The Magnuson Center has done so much to support us and help us succeed, and in return we hope to help further strengthen the Magnuson Center and the ecosystem.”