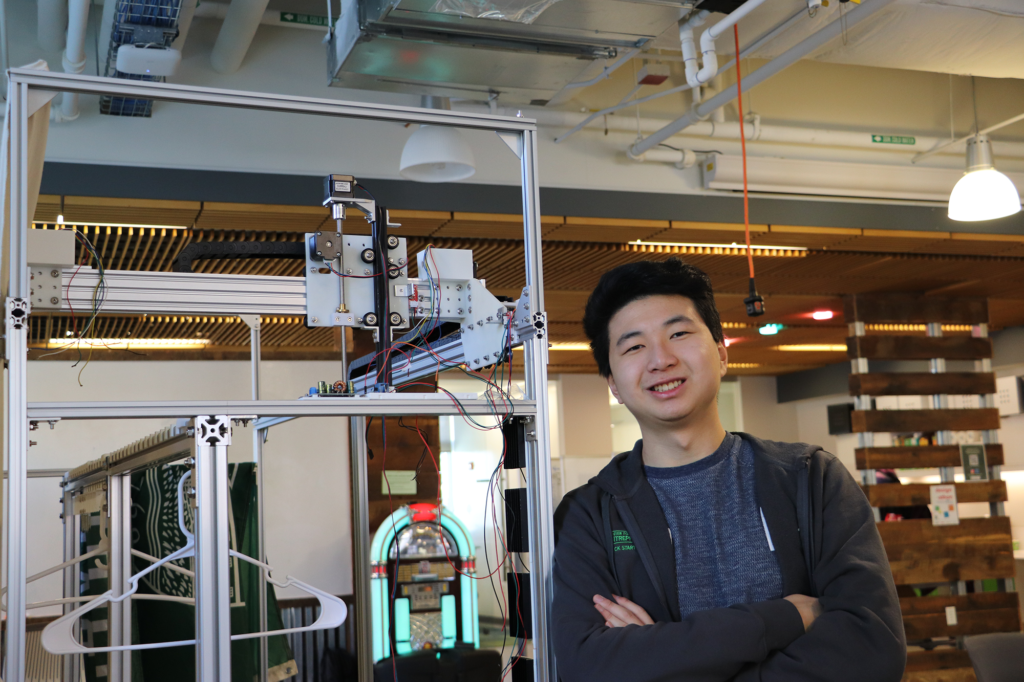 These Dartmouth students believe that by streamlining everyday processes through technology, small businesses can compete with the giants.

Andrw Yang, 21’ wants to solve problems small businesses may have with automation, beginning with one old school service: the coat check.

That ambition started with a challenge in ENGS 21, Dartmouth’s Introduction to Engineering course. Their goal was to solve a problem Hanover businesses encounter in the winter.

“The grand vision was to try to bring automation to help everyday processes,” Yang says.

Yang and his co-founders, Matthew Liao (D‘21) and Mitchell Meade (D’21) noticed that local businesses wanted coact checks, but didn’t have the required labor. Patrons at the venues complained about long lines to use the service.

“We realized these were symptoms of a grand problem: While big companies like Amazon can spend millions on research and development to pursue automation, small businesses are often left to use less efficient processes,” Yang says. “We wanted to enable small businesses to compete with companies doing major research and development into automation.”

The idea was simple: to develop an automatic coat check, where a person’s items are placed and retrieved using their finger print or credit card.

The coat check, called The Rack, is the proof of a technology that can have wider applications in the future, Yang says. “There’s a lot of potential in terms of automating processes that businesses do.”

After developing the idea in class the trio thought they were on to something. They decided to prove their automation technology outside the classroom. During sophomore summer Yang and Liao left Hanover for Shenzhen, China, where they worked on rapid prototyping.

“A little bit of an unconventional path, but we think if you want to truly do something great you have to make big moves like that,” Yang says.

While in China, the duo had to reverse engineer the chips used for computer numerical control (CNC) technology. Previously, the chips hadn’t been available in the public domain, so Yang was excited to make it more widely available. “I’m personally really proud of that because in the process of selling this product we developed and exposed this technology,” he says.

When Yang and Liao returned to campus, they focused on making their product as appealing as possible to customers.

“We had to go out there and talk to people to find what the problem is and find the best solution,” Yang explained.

They met with leadership at MGM Casino and entertainment complex in Springfield, Mass., where Dartmouth alumnus Michael Mathis (’94) was president and COO at the time.

“He helped set all this up,” Yang says. The casino agreed to trial The Rack and agreed there was an economic advantage to automating processes like the coat check.

“It was really nice having that validation,” Yang says.

Today, The Rack has agreements with MGM in Springfield and The HOP in Hanover. The team hopes to have a fully-operational product to deliver this year. Eventually, they want to expand to theaters in New York and other major cities. Yang believes that the technology has the ability to improve security and customer service, while saving smaller businesses money.

“People talk about the products that come out of the dorm room, but it’s really nice to have space like that to build a prototype,” Yang says.

In the space, they're constantly exposed to other people who are starting companies and meeting successful entrepreneurs, like Lindsey Allard (D’14) and Kristin Giovanniello (D’14), co-founders of Playbook UX. The Tuck School of Business and Magnuson Center Startup Incubator has also provided influential mentors including Ed Warren (Tuck’17), founder of Zippity, and Trip Davis (D‘90), CEO of FreshAir. Interactions with those like-minded people gives Yang inspiration and drive for his own project, he said.

While being full-time students and entrepreneurs can be challenging, Yang says that The Magnuson Center has supported him in both those roles.

“It really feels like Dartmouth cares about entrepreneurship when you look at the resources they provide us,” he says.

Yang is excited to continue to take advantage of those resources as they bring The Rack to market, revolutionizing the coat check before turning to other everyday processes that small businesses can make more efficient.

“I’ve always been interested in entrepreneurship and engineering,” he says. “When you combine the two, what you get is innovation, and that’s very powerful.”