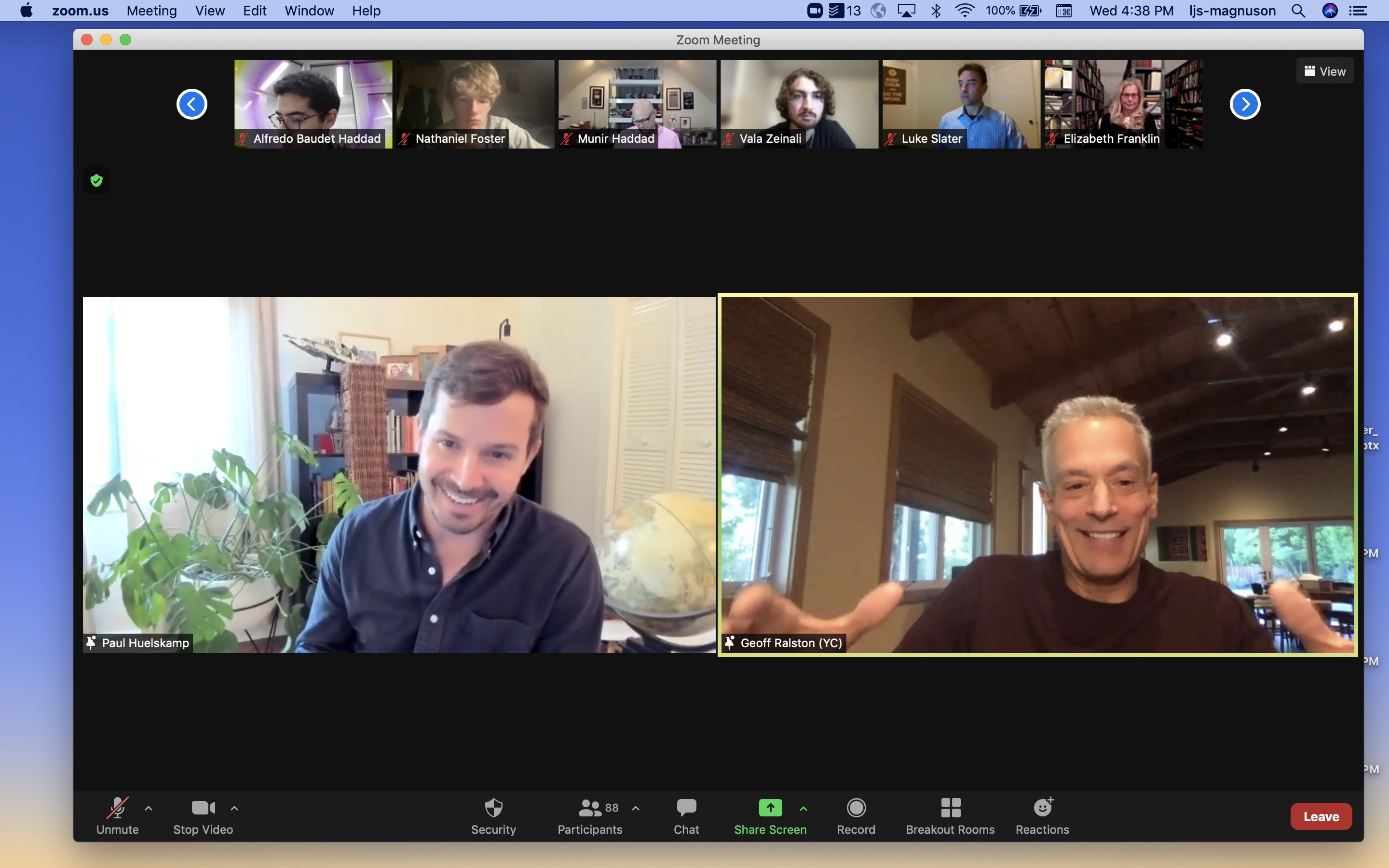 Paul Huelskamp D’06, was walking in the woods near his Northern California home when he had his lightbulb moment. It was fire season and power had been turned off, an occurrence so common that it had become routine. Huelskamp came across a spewing black smoke into the air, temporarily addressing the issue of suspended power but making the root cause of the issue — climate change — much worse.

Huelskamp realized there had to be a better way: a solution for temporary power that was both efficient and clean. He started brainstorming with his co-founders, and eventually started Moxion Power, a company that produces mobile, zero-emissions temporary power for industrial uses.

The company launched in 2020 and participated in Y Combinator, a well-known start-up accelerator, the following year. That’s when the viability of the company really came together.

“We wouldn’t be as strong as a company if not for YC,” Huelskamp said in a conversation with Y Combinator President Geoff Ralston D’82, during a Y Combinator at Dartmouth remote event.

A Great Time for Entrepreneurs

The past two years have been tumultuous, to say the least. While that can be stressful, the social disruption opens opportunities for entrepreneurs, Ralston said during the conversation.

“For those of you who are interested in entrepreneurship, this is a really great time,” he said.

At its core, Y Combinator is dedicated to one thing: helping founders succeed.

The accelerator accepts two classes each year: one running from January till March, and one from June to August. Start-ups that are accepted into the program get $125,000 in funding, but even more importantly they have access to mentorship and guidance from the top entrepreneurial minds.

“Everything is dedicated to helping you guys do whatever you need to do to make your company successful,” Ralston said. At YC entrepreneurs participate in office hours with Ralston and others. Weeks of refining their vision and pitch culminate on Demo Day, where teams present to investors. Although that’s now done remotely, the promise is as great as ever.

“Investors really are willing to invest over Zoom,” Ralston said.

For Huelskamp both the problem and the solution were clear: there was an obvious need for clean, portable energy. However, they realized that the execution of that solution wasn’t going to be straightforward.

“It’s not really a technology program. There’s a software and a service element to this business model that needed to be solved for this market opportunity to be unlocked,” Huelskamp said.

Y Combinator allowed the team at Moxion Power to refine their approach to portable clean energy. They addressed decisions like which industries to target; whether to rent or sell units; and how to engage with customers.

“We had to rethink the entire ecosystem of the product,” Huelskamp said. “In some ways it seems really obvious, but when you peel back the layers there’s a lot to it.”

Sometimes that led to contentious debate with the advisors at Y Combinator, but those discussions eventually positioned Motion Power to disrupt multiple industries.

“We navigated to a place that is really strong,” Huelskamp said.

Today, Moxion Power has raised $10 million in series A funding. The company is building a production facility that will manufacture 1,000 portable generators each year; and already looking to construct a second facility. In short, the company is growing quickly, Huelskamp said.

Huelskamp’s challenges look different than they did a year ago. Rather than refining its mission, Moxion is hiring and expanding. Yet, even at that stage the company can rely on the Y Combinator network for support.

“Once you join YC, you’re part of YC forever,” Ralston said. “We really are a community.”

Y Combinator alumni have access to mentors, investors and their peers to help address challenges that arise as a company grows. That human capital is what Ralston calls one of the “secret advantages” of Y Combinator.

“Money and even customers can come from your network,” he said. “Think about that network.”

Whether it’s Y Combinator or Dartmouth, Heulskamp has realized that his friends and classmates are some of his greatest assets as an entrepreneur.

“Those friendships are really really special,” he said. “You’ll be surprised at how successful your friends are.”

Advice for Students and Founders

Although the deadline for the Winter 2022 batch of Y Combinator has passed, founders can still apply. Because of the prestige of the accelerator, there’s a lot of bad information about how to get accepted, Ralston said. YC is working to create more resources around the application process, but the key is presenting your idea well.

“You’re telling about the future, in which you are a star,” Ralston said. “You have to convince whoever you’re talking to that your version of the future is a true one. The more evidence you have that that future might come about, the easier it is to make that case.”

For people who are interested in entrepreneurship, but don’t yet have a company, Ralston recommends a playful and experimental approach.

“Find your people, find your idea, and build stuff,” he said.

Y Combinator recently launched a program called Work At A Startup. The site connects early-stage startups with entrepreneurial-minded workers. Learning from others can help you get closer to launching your own company, Ralston said.

For Huelskamp, the challenges of starting a company are well worth it.

“I feel like I’m an 8-year-old going to Disney every day when I go to the office,” he said. “I wouldn’t trade the life of an entrepreneur. It’s the best career I can imagine.”