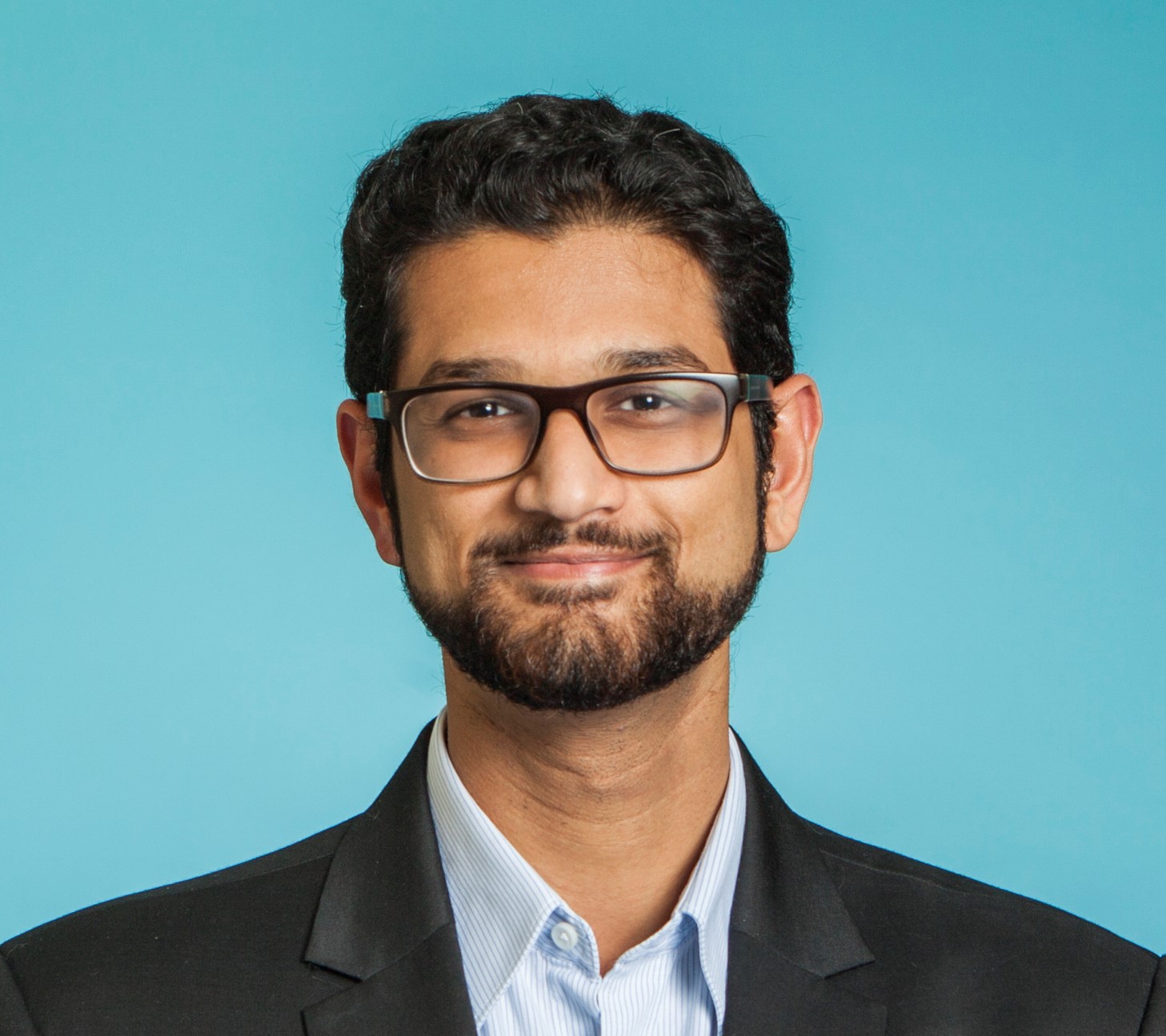 Molly Carpenter, a postdoc in the Thayer School of Engineering, describes herself as “very much a basic research scientist.” But in her efforts to develop a tool to further her understanding of human B cells, she stumbled into a new technology that could be powerful for cell therapeutics.

Now Carpenter, along with her teammate Urjeet Khanwalkar, a graduate student at Thayer, are pursuing that technology as part of Dartmouth’s Innovations Accelerator for Cancer (DIAC), a program of the Magnuson Center for Entrepreneurship, in partnership with Dartmouth’s Cancer Center. The accelerator, which launched in 2020, aims to provide researchers the tools and expertise needed to translate their innovations into the marketplace. DIAC participants complete a 10-week educational course, have access to advice, feedback, and support from industry insiders through the greater Magnuson Center network of alumni, and compete for financial support to further their translational research.

“The Accelerator represents a One Dartmouth approach to advancing Dartmouth’s healthcare ecosystem,” says Jamie Coughlin, Director of the Magnuson Center for Entrepreneurship. “The Dartmouth entrepreneurial community in healthcare is robust and deep.  We are excited to further activate this network through the Accelerator and advance the amazing research of our students, faculty and staff into products that touch lives.”

All of that enables innovators like Carpenter to consider entrepreneurship, perhaps for the first time.

“Just starting to think about my work translationally has been a huge change,” Carpenter says. “To do it at this level, with this quality of support, has opened up my thinking tremendously.”

Bringing Research Out of the Lab

DIAC started through the generous financial support of five Dartmouth alumni, all of whom are healthcare investors or who work in the healthcare industry. To date, over $5 million has been raised to support the program. The first cohort, which completed DIAC in the spring of 2021, included 17 teams; the second cohort, which is in progress, has 18 teams. Six of those teams have members who participated in the first cohort and are returning to further their education and pursue additional funding to advance their projects.

The Magnuson Center approach to entrepreneurial training is focused on an educational first method that connects participants with industry experts. As a result, the ten-week educational component of the course was developed and delivered in partnership with Simbex, a medical device and consumer health product design and development partner based in Lebanon. Teams are evaluated by an External Review Panel comprised of Dartmouth alumni from some of the top venture capital firms in the world as well as experienced entrepreneurs in the biotechnology industry.

This year, participants represent all corners of campus, says Barry Schweitzer, Ph.D., D’82, Associate Director for Strategic Initiatives at the Magnuson Center for Entrepreneurship. Participants include faculty, post-docs, and an increasing number of students.

Fourteen of the projects in this cohort are drug platforms or single therapeutics, two are diagnostics, and two are digital health projects. The projects represent several different departments, including two from Dartmouth Hitchcock Medical Center. Forty-two percent of the teams have female faculty sponsors, double that of last year’s cohort; in addition, two undergraduate teams are participating in DIAC this year.

“It’s been this huge crash course to all of these things that school does not teach you,” says Siddhant Parwal ’23, who is participating with teammate Dev K. Kapadia ’23.

DIAC has also provided educational opportunities across campus through internships and other leadership engagements for undergraduates and students at the Tuck School of Business.

Savannah King is a second-year MBA student at Tuck and graduate intern with DIAC. She has been conducting market research for the teams, which allows her an intimate glimpse into each project.

“To understand what they’re doing, how it’s impacting patients, what the business landscape looks like, how I can help on a small scale to further their project has been amazing,” King says.

After graduation, King will take a job with a large company, but she anticipates that having a deeper knowledge of the biotech startup process will help her as she moves through her career. This outcome fits just fine into the Magnuson Center’s pathways of impact that are designed to infuse campus with entrepreneurial thinking, and expand the ways participants can benefit from entrepreneurship.

“It has given me more of a global understanding of what’s out there in the landscape of merging science and business,” she says. “I’ve gained insight into the future of biotech innovation, and how that begins.”

While the educational component of DIAC is important, the true magic happens in the relationship-building between participants and experts, says Khanwalkar, the graduate student working with Carpenter.

“These are high profile folks who are very much in the thick of the field, being willing to freely impart knowledge that they have spent time gaining,” he says.

Although there’s no handbook for biotech innovation, DIAC provides a curated set of knowledge to guide Dartmouth innovators, Khanwalkar says. That makes a concrete difference in how they pursue their technology and allocate resources. After speaking with alumni investors, Carpenter and Khanwalkar pivoted the course of their experiments, pursuing those that proved product viability. This builds on the strong and diverse network of alumni and professionals that the Magnuson Center has built over the years. Matching those industry experts with Accelerator participants is an attractive component of the program.

“The way we prioritize experiments is a little different than if I were just following my nose and the literature,” Carpenter says.

Brock Christensen, Professor of Epidemiology, Molecular and Systems Biology, and Community and Family Medicine at Geisel School of Medicine, is participating in the accelerator for the second time. During the educational sessions he’s able to interact with experts and ask them questions directly, which is invaluable.

“The accelerator has provided immensely helpful practical knowledge on how to think and communicate about our immune profiling technology with a mind towards its commercial potential,” Christensen says. “At the same time, we have gained a clearer understanding of the paths to commercialization and how our approach can be more than a scientific goal.”

For Alexandra Massa, a PhD Candidate in the Department of Microbiology and Immunology, DIAC has revealed resources that she didn’t know were available.

“It’s helped me to forge connections, both in and outside of Dartmouth, that I might not have had the opportunity to otherwise,” she says.

Through the accelerator, participants learn how biotech investors think and what is going to be most appealing to them. It’s a more targeted approach than considering impact in a vacuum, says Kapadia.

“It’s a balance of what’s going to help a lot of people, but also is attractive to investors and will be economically feasible,” he says.

This also impacts how teams portray their innovations.

"We have been able to mature how we present the capabilities and opportunities for applying our immune profiling platform technology, to make it more approachable both to potential investors and customers,” Christensen says.

While the experts involved with DIAC are encouraging, they’re also frank about the truths of bio innovation, encouraging participants to be mindful of the low odds of success, without fixating on them.

“We talk from a very romanticized standpoint,” says Parwal. “But the reality is a very, very high failure rate. That’s the nature of this industry. That’s something that’s been made pretty clear.”

During this session, more than 20 follow-up meetings have taken place between DIAC participants and alumni working for investment firms or biotech companies. That builds on the success of the first cohort.

“The magnitude of the return on the investments made by the DIAC program already has been striking,” says Schweitzer.

Over a dozen invention disclosures and patent applications have been filed by DIAC teams, six start-up companies have been formed, several Small Business Innovation Research grants have been applied for, one project has received an additional $100,000 in funding from a biopharmaceutical company, and several technologies have been licensed or optioned or are in the process of being licensed. One team has a term sheet for several million dollars of investment by a global venture capital firm.

Funding awards for the second cohort will be made later in the spring. Teams are competing for the $300,000 Venture Development Award, a $100,000 Early Stage Project Award, and a $50,000 Quinn Innovation Award. The funds are awarded based on teams’ project proposals for how to use the money to advance their technologies towards the clinic.

Four teams, including Carpenter and Khanwalkar’s, split a $100,000 Stu Trembly Award. The award, which is new for this cohort, is named for a Dartmouth professor and alum, and a participant in DIAC’s first cohort, who passed away suddenly this year.

“Stu Trembly was one of the first people that I spoke to about the idea of starting a program like this at Dartmouth, and his encouragement really spurred me to move forward,” Schweitzer says. “He followed up his words with action by being the first one to submit a project to the 1st cohort, and even though he made it to the finals but didn’t win an award, he told me before he passed away that he was planning on trying again. The program team all felt that they wanted to do something to honor Stu’s entrepreneurial spirit, so we created the Stu Trembly Award.”

These funds are to be used for a three-month project that will move teams forward significantly before the final External Review Panel meeting in April.

“Having those funds has allowed us to really define what the gaps are in the biotech space and try to address some of those gaps with our platform,” Carpenter says.

While the commercialization aspect is important, the energy that DIAC has created on campus is even more meaningful.

“Harder to measure but no less impactful in the long run has been the catalyzing effect that the Accelerator has had on interest in biotech across the campus,” Schweitzer says. “More people in the sciences at Dartmouth are taking notice of what is going on with the Magnuson Center and are now asking us to expand the program framework beyond cancer.”

For more information or to support DIAC, click here.