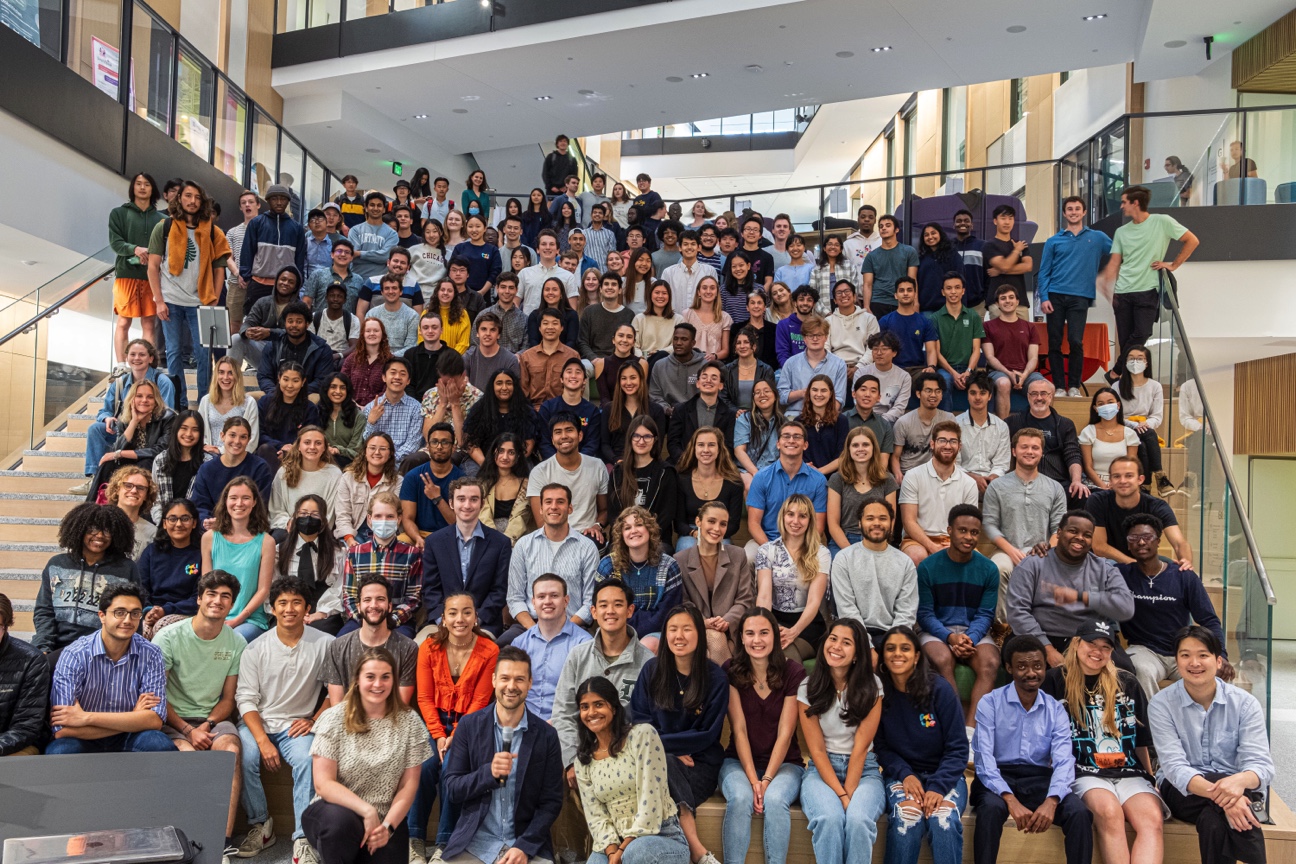 Have you ever paused to consider how a bee sees the world? That distinct change in perspective is the idea behind Anivision, a project compiled by Dartmouth students in the DALI Lab to show the world through the view of different animals.

"It aims to teach greater understanding of how animals experience their surroundings, why they experience it in such a way, and how these factors come together in pursuit of survival," says Macy Toppan '22, who worked on the project.

Anivision was one of more than 60 student projects presented at Technigala, held earlier this month. The quarterly event sponsored by the Computer Science Department, the Digital Arts Program, the Magnuson Center for Entrepreneurship, and DALI Lab was held for the first time in the new Class of '82 Engineering and Computer Science Center in the West End.

"Being able to host the event in the new building was fantastic; seeing so many people and projects in one place carried such power as an inviting space of innovation, appreciation, and shared hype and excitement," says Toppan, who will be returning to Dartmouth for her master's degree in computer science and digital arts in the fall.

Technigala brings together students from computer science classes and the DALI Lab, allowing them to showcase their final class projects or DALI initiatives that they've been working on with partners. Among the classes presenting were CS52 FullStack Web Development, CS25 UI/UX Design, CS98 Senior Design and Implementation Project, CS69, CS22 3D Digital Modeling and CS27 Projects in Digital Arts.

This year, the event was standing room only, with scores of people moving through the atrium to celebrate projects like Anivision.

"Students need their work to be celebrated," says Tim Tregubov, senior lecturer in computer science and director of the DALI Lab.

While a typical final project might only be presented to a class or shown to a few close friends, Technigala offers students the chance to showcase their work to a much wider audience.

Annie Qiu '24 was showcasing her final projects for Intro to UI/UX Design (CS25) and Full-Stack Web Development (CS52) courses. The project for CS25 was an app designed to bridge the generational gap in multicultural families. For CS52, Qiu developed a mobile app called Well Buddies with a group of fellow students.

Showcasing class work makes it more valuable for real-world learning, says Tregubov. Students can't get stuck on the small details of their work—like designing a seamless landing page. Instead, they learn to focus on the core of the projects, the aspects that will engage and entertain their audience during Technigala.

"That helps them see the point of why they're doing all of this," says Tregubov. "It makes a project more than just an exercise."

And projects, Tregubov believes, are intrinsically more motivational than a final exam.

"A final project lets you see how your learning can impact the world," he says. "It's very different if you're working toward a project you'll show to friends, family, strangers and potentially VCs. That makes it much more exciting."

For the attendees, the level of interest from other students, faculty and community members shows just how engaging the projects are for consumers, says Tregubov.

"I'm always impressed," he says. "It's so cool what students can build, and more people deserve to see these projects."

Qiu, a designer at DALI Lab, enjoyed getting the opportunity to try out projects that she had heard her classmates and colleagues at DALI talking about.

"It was most fun seeing the projects everyone else has been working hard on in both the classes I'm in and classes I'm not a part of," she says. "My favorite moment was getting to try out Veridium, a VR experience made by DALI, and the Salvador Dalí Eye Tracking Exhibit, also made by DALI. Trying out VR projects are always super surreal."

"It's a way to draw people into learning about the different fields; people become interested in a particular class after seeing the output from it," Tregubov says.

In the future, Tregubov would like to see the event expanding to include engineering students from Thayer. That will reinforce the interdisciplinary approach that the entire West End is built on.

"We see this event growing every year and I hope eventually it will be a day-long end-of-term celebration expo that everyone looks forward to, with CS, Engineering, Design, and Entrepreneurship students all sharing their learning and project work with the community."

Building connection and camaraderie on a personal and institutional level is a central focus of Technigala.

"Maybe it's because the Digital Arts program is so small, but for many of my friends, peers, and past teammates, this was the last time they'd work on projects like this," says Toppan. "Being able to come together and celebrate our growth as students, not to mention the growth of the department as a whole, made me feel so genuinely happy and proud of all of us and what we've accomplished."

Even for students who are not returning for graduate work, the spirit of celebration at the end of the year is important.

"Technigala is an opportunity to share projects and excitement. It results in this great celebratory ethos of positive chaos," says Toppan. "Part of the fun of it all is that even as they graduate out into the next stage of their lives, new students come in with new ideas, and that spirit never ceases."