As a scientist and biotech innovator, Gardner has learned about balancing the demands of academia and enterprise. 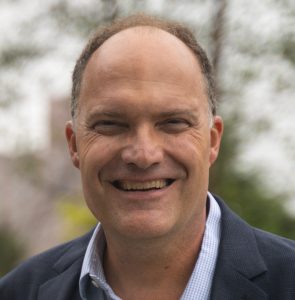 A few years ago, Kevin Gardner was the founder of a biotech company, Optologix, Inc. The technology from the company had emerged fairly directly from Gardner’s research and had commercial potential. But Gardner was trying to bring the product to market while also maintaining a very active research lab.

Gardner has seen both sides of the coin. His other company, Peloton Therapeutics, Inc., pursued outside business expertise sooner.

“There, in contrast to the Optologix story, we very quickly got involved with venture capital,” Gardner says. "That helped us be able to get the resources to go hire teams for both management and research.”

In 2019, Merck acquired Peloton Therapeutics, Inc. for  more than $1 billion.

Earlier this month Gardner spoke with the Third Cohort of the Dartmouth Innovations Accelerator for Cancer (DIAC) about balancing academics and entrepreneurship. His talk was titled, “Turning nature's switches into new therapies and tools: an entrepreneurial journey.”

Drawing on his experience commercializing technology, Gardner emphasized the importance of building out a team, just as he did with Peloton Therapeutics.

“It’s absolutely essential for many reasons,” he says. "Really, it takes a village.”

A biotech innovation team should include experts in all the requite areas, from business planning to finance to research. That allows each individual to focus on what they are best at. For researchers, that might be focusing on new discoveries, while letting other members of the team take steps to protect intellectual property and explore commercialization.

Surrounding oneself with other skillsets and experts is especially important for people who are in a full-time faculty role. Gardner has faculty appointments at the CUNY Advanced Science Research Center and City College of New York

“I recognize the limitations of where I can take steps toward commercialization, without compromising my ability to meet my academic responsibilities,” he says.

Innovators must have a touch of humility, being willing to recognize your limits and staying open to collaboration.

“I recognize what I’m good at and what I’m not good at,” Gardner says.

“It was 22 years from my first experiment to the first day that Merck sold anything,” Gardner says. “That’s a long window, and that’s inconsistent with the typical seven-to-ten-year tenure clock.”

Many researchers are most innovative early in their career, when they can be singularly focused on research. That’s a time of great potential, but also one when there is “intense pressure to get the skins on the wall needed to demonstrate that you’re someone who should be invested in,” Gardner says.

Research, with an eye toward commercialization

Researchers like those participating in DIAC should not lose sight of the importance of academic research, Gardner says.

“If you’re interested in this at all, go discover something important,” he says. “That’s usually a real basic science — a well-rooted discovery.”

Considering commercialization shouldn’t be the primary motivator that drives research, but it’s important to have in the back of one’s mind.

“Research with your eye or ear to the ground for how this could have an application. Don’t be blind to it,” Gardner says.