During the kick-off event for the Dartmouth Entrepreneurs Forum, the Nike CEO challenged attendees to rethink what makes people qualified for certain professional roles. 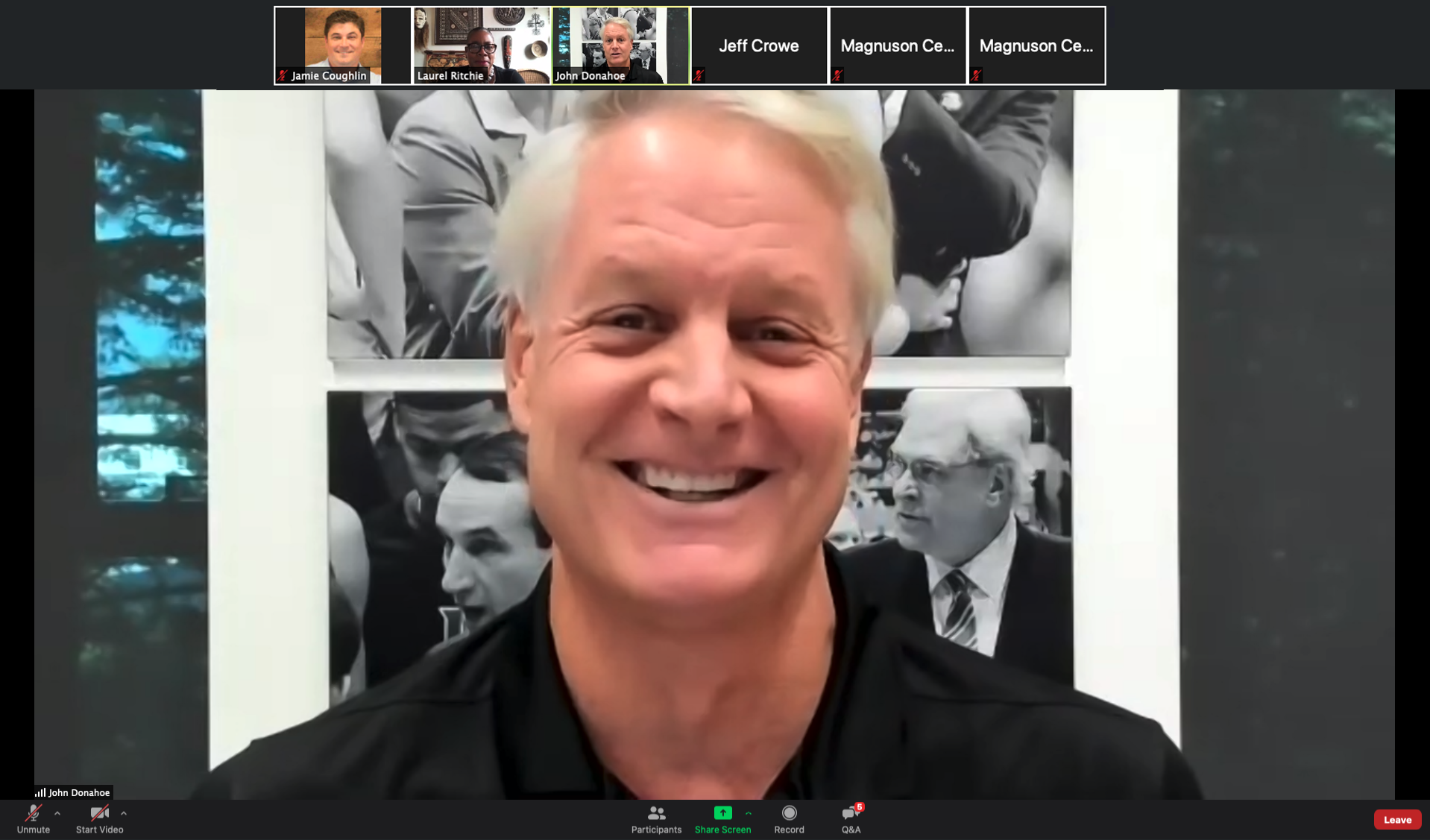 During an hour-long discussion with Laurel Richie ’81, Chair of the Dartmouth College Board of Trustees and former-president of the WNBA, Donahoe touched on the value of diversity, work-life balance and his leadership style.

Donahoe took the helm at Nike in January, just before the pandemic. He said that when sports were put on hold — with everything from the NBA to the Olympics cancelled or postponed — Nike shifted its focus from connecting with consumers through sport to making more personal connections at home.

Donahoe spoke about periods of adversity as growth opportunities — both personally and professionally. He challenged attendees to think of the moment that they’re most proud of, first in their professional lives, then in their personal lives. Most people find that in retrospect, adverse circumstances prompt the growth they’re most proud of, he said.

Diversity, equity and inclusion were dominant topics during the discussion. The killing of George Floyd made Donahoe, who is 60, reflect that not enough has changed in terms of racial equality since he was a student at Dartmouth.

“There’s a commitment that I feel, and that this company feels, to make sure that we make progress now,” he said.

He spoke about tennis great Serena Williams, one of Nike’s best known athletes. Williams challenged Nike to hire more diverse designers, telling the company that she wanted to see more designers who look like her. In response, the company hired Black female designers to work on Williams’ projects.

“It creates a more rich, innovative and creative culture across the design community,” he said.

That anecdote prompted an attendee to ask, “why not just hire the most qualified people?”

“What does qualified mean?” Donahoe said. “There’s very strong biases in the word ‘qualified’ and how we define ‘qualified.’ There’s an over-focus on degrees, and degrees are for privileged people.”

Instead of focusing on degrees, Donahoe has started to focus more on skills, he said. Richie added that there’s value in having a diverse team, and business leaders need to acknowledge and prioritize that as well. Entrepreneurs building their teams should consider diversity imperative, Donahoe said.

“You have to expand horizons a little more,” he said. “Creativity often comes from someone who sees things different.”

Donahoe shared about balancing work and family life. He met his wife, fellow Dartmouth Trustee Eileen Chamberlain Donahoe ’81 on campus, and together they had four children. Their first was born when the couple was 24- and 25-years-old. Because of that, the Donahoes grew their families and their careers at the same time.

“We had no choice [between family or career] — it was both,” he said. Donahoe said he and Eileen checked in with each other regularly to see if they were “in the band” — a shorthand way of asking if they felt good about how they were balancing careers, family and their relationship. Sometimes they did, sometimes they didn’t, but checking in was always helpful.

“You have to embrace the struggle and say it matters to you,” Donahoe said.

Asked by an attendee about his biggest professional challenge, Donahoe said that he has been seeing a therapist for 30 years to overcome and explore his fear of failure. He started seeing her early on in his career when he was working at Bain Capital. He started experiencing anxiety attacks that would keep him up at night.

“It was tormenting my day-to-day experience and ability to be present in the moment,” he said.

Donahoe spoke about his inner journey as continuous, and said that people should not be afraid to get professional help with that journey.

Responding to the same question about a professional challenge, Richie spoke about an incident when she was president of the WNBA. Two players who were in a relationship were involved in a domestic violence incident, prompting a 3 a.m. call to Richie. She had to fend of the league and the press while also trying to determine how to get the women the help she felt they needed.

Her biggest challenge was “having to confront my values, stand firm and stand tall in the face of uncertainty and adversity,” she said.

At the end of the session, an attendee asked Donahoe if bringing manufacturing back to the U.S. would help the Black community. Donahoe didn’t shy away from the fact that 20-25% of Nike manufacturing happens in China — the company is proud of that, he said. While a lot of production is Asia-based, bringing manufacturing onto American soil simply isn’t financially feasible — it would triple the price of sneakers, Donahoe said.

Although he graduated nearly 40 years ago, Donahoe said that his Dartmouth education has been pivotal throughout his life.

“It’s been the most formative and foundational part of who I am,” he said.

Are you an entrepreneur seeking funding? Expand

To make your request for funding, please contact angels@dartmouth.edu

Becoming a member has it's advantages!  Together we can facilitate innovation.

Through annual networking events across the country, Dartmouth Angels and entrepreneurs meet to exchange their latest ideas, innovations, and financing strategies.

Email us at angels@dartmouth.edu to become a member today!